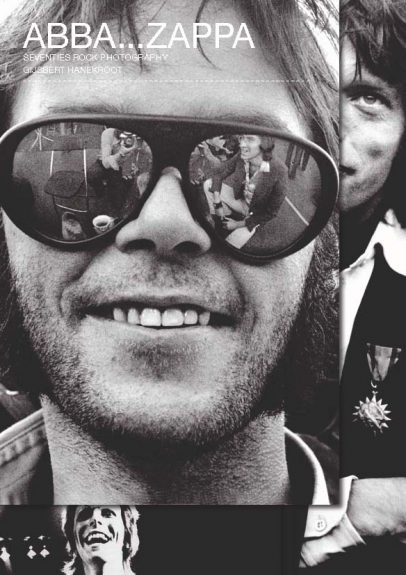 Gijsbert Hanekroot started his career as a photographer of rock musicians in the late sixties. Together with designer Sybren Kuiper, Gijsbert has selected 300 black and white photographs from his work. Sybren has made a unique design for the book, beautifully printed in duo tone. You will be taken on an unforgettable journey back in time by this rare compilation of pictures: seventies rock photography as you have never seen it before.

Have a look inside the book

Could you describe concretely what the collaboration with a photographer looks like? Gijsbert Hanekroot’s book, for example, is very successful. How did that work out in practice?

It’s funny that you pick out “Abba…Zappa” of all things, because that’s the only example where I implored a photographer to let me design his book. The book is very close to my heart. In a way, it’s a good example where I was given a considerable amount of freedom, perhaps like no other book before. “Abba…Zappa” is a survey of the work of Gijsbert Hanekroot, who was the in-house photographer at Oor, the Dutch equivalent of Rolling Stone, in the late 1960s to the mid-1970s. At some point Gijsbert visited me in the studio. I’ll never forget the sight of him arriving with two huge plastic bags filled to bursting with original prints. I asked him about the amount of photos, to which he replied, a little absently, that these were just the first three letters of the alphabet. He spread out stacks of photos of my rock heroes, in random order, in different sizes and shapes. Under each picture there was always a new surprise to discover. Immediately I felt that it would be a good idea to simulate a similar effect for the reader of a book. As if he were leafing through a stack of photos in which the hectic energy of that time is captured. But of course it should be a real book, bound and not just a pile of loose pictures… The difficulty would be to produce a book with seemingly jumbled together photos of different formats and sizes. How could such a thing be bound, if not by expensive manual labour? The printer said it was impossible, but I didn’t want to give up and went straight to the bookbinder. To my surprise, a little later he sent me a dummy with a wealth of different page formats and variations, mechanically bound.
Actually, I was overwhelmed to think up a design at the same time and choose the photos to go with it in a meaningful way. So I tried to limit myself to 10-12 variations and to make the photo selection fit into a scheme. It was a balancing act like a circus, where I especially had to keep an eye on the binding if I wanted to vary the sizes of the pages. Gijsbert and I were both convinced that it would be better for the book to follow an intuitive order instead of an alphabetical or chronological one. He gave me all the freedom in putting it together… but somewhere in the middle of the selection process he suddenly called a little worried. After 35 years as a photographer, he said, he was pretty sure which was the strongest image in a series. I told him that I understood that well, but didn’t quite see what he was worried about, when he replied, “Well, you always picked exactly one other photo than me”.
This was interesting to me because I work very intuitively and try to see what an image or combination does to me as a viewer. So I explained to him the reasons for my choice. I had realised that Gijsbert had made a series of images that showed the rock stars in very personal moments. No prefabricated role clichés, no poses like those of their colleagues. In Gijsbert’s photos they seemed much more human and accessible. When even Neil Young, the self-proclaimed lone wolf, smiles…