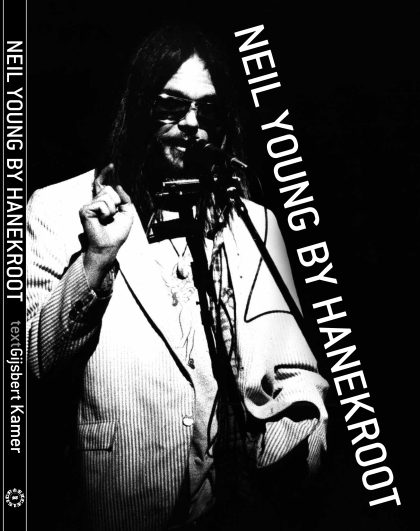 In June 1975, Neil Young released his sixth studio album, Tonight’s the Night. It was his most oppressive record until then. Decades later, Tonight’s the Night is widely recognised as a masterpiece, and a pinnacle in the oeuvre of Young, who was 29 when it was released.

The same age as photographer Gijsbert Hanekroot, who was responsible for the cover photo of the LP packed in jet-black cardboard.

Hanekroot took the now iconic picture a year and a half earlier in London’s Rainbow Theatre. The photo in which we see him in a summer jacket with a harmonica around his neck, dark sunglasses, and holding up his right finger, as if he has something important to say or maybe even wants to warn us, has become almost as famous as the record itself.

This book gives an overview of the images Gijsbert Hanekroot took of Neil Young’ s performances during the seventies. Rainbow Theatre, London, November 5, 1973.

Young had ordered some tequila to consume in the dressing room and onstage, but the desired Jose Cuervo Gold was nowhere to be found in Britain. Whether Meijers could bring seventeen (!) bottles? Seventeen was a bit much, but he did manage to get four bottles after meticulously consulting the Yellow Pages. As a result, Meijers and Hanekroot finally, after years of trying, got into a conversation with Young on the evening of November 5th.

Gijsbert Kamer has been writing about music since 1992. He wrote reviews, features and portraits and interviewed artists like Tom Waits, Prince, David Bowie, Erykah Badu, Lauryn Hill, Brian Eno, Brian Wilson, Al Green and Sonny Rollins. He published two books, Pophelden (2005) and Popmuziek in een Notendop (2008). In 2001 his work was awarded with the Pop Press Prize.