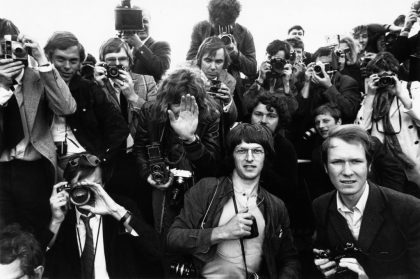 Dutch photographer Gijsbert Hanekroot (Brussels, 1945) started his career as a photographer of rock musicians in the late sixties. Back then, the rock scene was not quite the well-oiled machine it is today. Things still had to be invented: light installations, sound, promotion, organization, crowd control. This also applied to music journalism and photography. Almost every week, new groups were being discovered. Every single day, people were learning things and adapting them.

Hanekroot’s development as a photographer essentially ran parallel to developments in the music scene. He travelled frequently and came face to face with the music icons of that period. His photos can be divided into four categories: concert photos, studio photos, portraits and photos made at press conferences.

Gijsbert stopped being a professional photographer in 1983 and became an entrepreneur. A few years ago he began to digitize his archives. This led to the publication of Abba..Zappa Seventies Rock Photography and exhibitions in a.o. Paris, London, Moscow, Tokyo, Frankfurt, Hong Kong and Amsterdam.